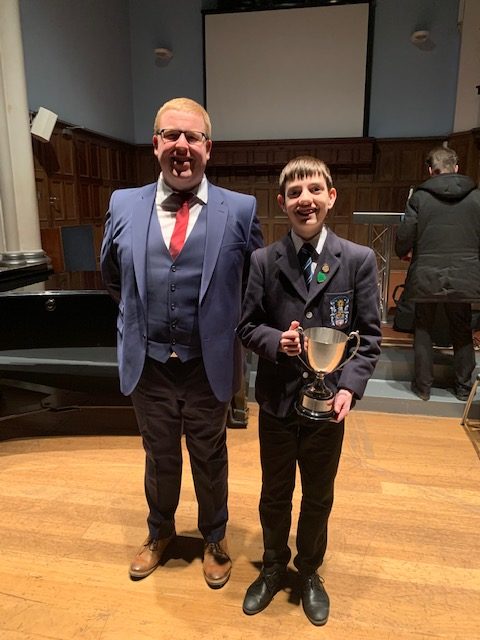 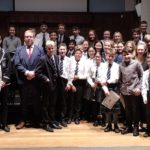 The Hutchesons’ School Music Competition took place on February 20th and saw over 70 pupils from P7 to S6 participating in the annual event.

Guest adjudicator and Royal Scottish National Orchestra principal trumpet, Chris Hart, praised all of the pupils, staff and audience for supporting the Music Department before announcing the winners.

Congratulations to the overall winner, S2 pupil Daniel,  who won Musician of the Year following his outstanding performance of Solo de Concours by Messager on clarinet.

The School Music Competition Trophy (The Biggars Trophy) is awarded each year to the overall best performance and this is the second year Daniel has won this prestigious award.

The Grade 7 + winner this year was Maoyang (S3) who played a wonderful rendition of Lithuanian Song by Chopin on piano. The Grade 7 Highly Commended pupil was Laura (S5) following her impressive performance of Fantasia by W.A Mozart on piano.

The Grade 5-6 winner was Daniel (S2) who played Lucy Long by Godfrey on the bassoon. The highly commended winner from this section was Nicholas (P7) who played traditional Scottish music. Nicholas was one of the youngest performers of the evening and got everyone into the Scottish spirit with his confident playing on the Highland Bagpipes.

The Grade 3-4 winner was Nina (S2), and she sang Shallow by Lady Gaga beautifully. The Grade 3-4 highly commended winner was Cameron (P7) who played Sonata (Allegro) by Breval on cello.

A special mention was given to the Wind Quartet on the evening, with pupils Esther (S3), Alexander (S2), Daniel (S2), Rachel (S2) all praised for their performance of The Second Waltz by Shostakovich.

The pupils had a chance to meet Mr Hart at the end of a hugely positive and thoroughly enjoyable evening. All at Hutchesons’ Grammar School were grateful for Mr Hart’s pertinent and engaging feedback and everyone was able to take so much away from the evening.

P7 pupil Fraser was nominated by Jackson Carlaw MSP as his Junior Local Hero and invited him to the official ...

Recent school-leaver and hockey player Struan Walker (C2020) made the most of his first Scotland cap – scoring 3 goals ...