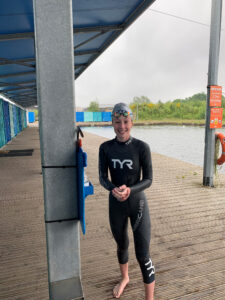 S3 pupil Amy was determined not to let Covid lockdown and pool closures get in the way of her swimming ambitions,  so began training in a local canal.

Her dedication has clearly paid off. Amy is currently the fastest swimmer in her age group at 50m and 100m breaststroke and fourth in the 200m individual medley.

She has also been promoted to the national performance squad at City of Glasgow swim team, which targets swimmers who compete at national and international level. Two other Hutchie pupils are on the squad – Alex , S3 and Heidi, S2

While she has been unable to compete during the last year, her recent training times indicate she is making good progress. During last summer and early autumn she maintained her fitness by training in a canal at Port Dundas.